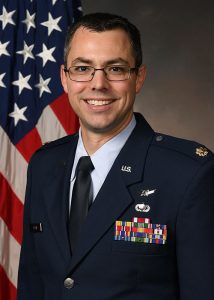 Major Olsen received his commission through ROTC from Texas A&M University in 2008, graduating with a degree in mechanical engineering. He also holds a master’s degree in systems engineering and a Doctor of Philosophy in aeronautical engineering from the Air Force Institute of Technology. His experience includes technical intelligence analysis, aerospace research, and science and technology program management.